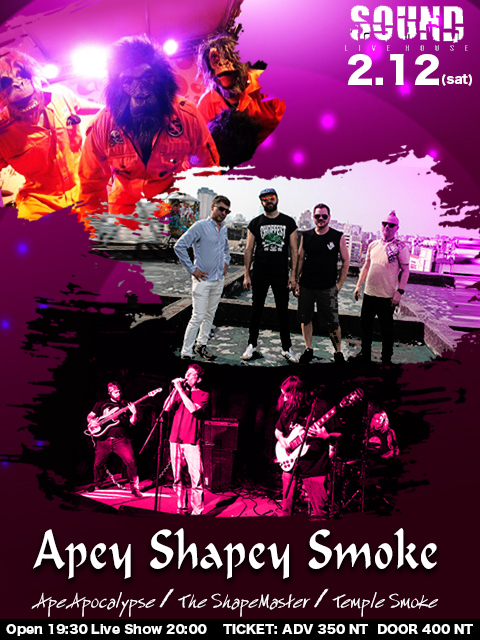 2022/2/12(SAT) Apey Shapey Smoke
Come one, come all, for a night of APES, SHAPES, and a whole bunch of SMOKE!
We have three of Taiwan's hottest expat bands coming together to bring the roof down:
The ShapeMaster
Hailing from the UK, Canada, and the U.S.A., The Shapemaster blend rock, punk, indie, and that other sound, shaping a very shapely shape indeed.
Temple Smoke
Temple Smoke is a Tainan based hard rock group comprised of Eric on lead vocals, Cory on guitar, Chad on bass and backup vocals, and Andrew Jackson on drums. Together they bring heavy sonic riffs for your listening pleasure.
Ape Apocalypse 末日之猩
The Apes came from a parallel universe where simians rule and humans run wild in the jungle. While on a deep-space mission, their ship fell through a crack in the fabric of reality, leaving them stranded on earth. Despite their sincerest efforts, they have been unable to understand the creature ‘Man’. The beliefs and conduct of Man are, in equal measure, both strange and ominous.
"... After the crash, there was little for us to do other than take these musical instruments and see what we could make with them..."
The original Space Apes divided into factions and scattered across the planet. Some hoped to live in peace with Humans. Others, however, choose to unite with indigenous simians who had been oppressed for generations. A new, more radical brigade was thus formed, known only as APE APOCALYPSE...
2022/2/12(SAT)
✸ 19:30 入場
✸ 20:00 開演
✸ 預售票 NT$350
✸ 現場票 NT$400
-----------------------------
＃活動開演前十日即不再受理退票，退票請洽indievox。
＃一人一票入場，票卷遺失，須重新購買，恕不補發 。
＃本場館全面禁帶外食
＃本場館全面禁帶外食
＃本場館全面禁帶外食
＃本場館全面禁帶外食
演出接洽/專場活動/場地租借/合作提案
請洽台中迴響粉絲專頁私訊

※Please read and agree to all the terms and conditions before placing the order. Purchasing or refunding is treated as fully agreeing to all the rules above.